Lincoln Center’s Production of THE KING AND I

Last spring, after a long and mostly boring recovery from a January knee replacement, off I went on my customary biannual theatre binge in New York. I was eager to find plays that would be challenging, leave me excited, thinking, questioning. Picking from the discount listers, I deliberately chose The Crucible, The Effect, The Father, The Humans, Prodigal Son, and Blackbird (all discussed in previous posts below). And then, just for nostalgia’s sake, I added in The King and I. Turns out, all but two turned out to be Tony Award winners. (The exceptions were off-Broadway’s Prodigal Son, and The Effect, which should have had their turns at the Obies.)  More importantly, all seven were challenging, perceptive, excellent theatre, just what I was in the mood for. And every one of them offered a personal attachment to me, whether a familiar moral or political argument, a reference point for the workings of my own aging mind, or a poignant memory of my own experiences in the classroom.

But everyone wanted to know: What was my very favorite of the shows I’d managed to squeeze in? The answer, of all things: The King and I.  Ironic, isn’t it?  A safe old Rodgers and Hammerstein revival?  Challenging, thinking, questioning, and beautiful?  It closed at New York’s Lincoln Center on June 26, after 1¼ years and 538 performances. However, there is a planned national tour in the works.  Audiences are not done with this one yet. So just for fun, I want to spend this and my next post chatting about it. 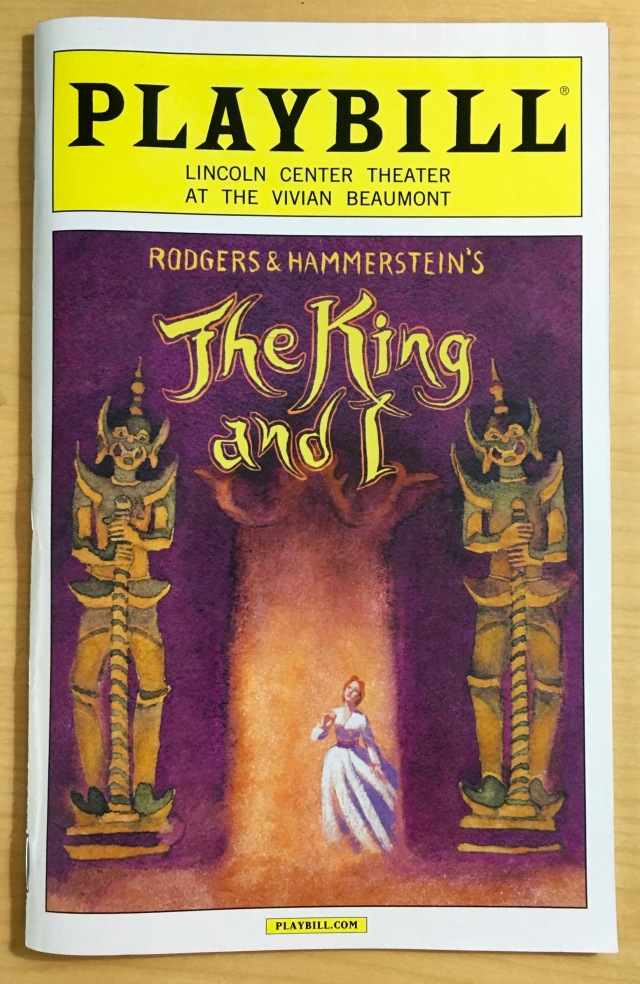 Those of you who are my regular readers know by now that I make no claims and expend no effort towards objectivity. Quite simply, this is a show I have always loved, and would see repeatedly wherever I could find a decent production. This is Rodgers and Hammerstein at their very best, working together on something very new and different from their previous work. Without a “happily-ever-after” love story, it’s perhaps less often produced, less accessible and more exotic than their more familiar Oklahoma, South Pacific, and Sound of Music. But this is music I have listened repeatedly to all my life. This is music I used to sing, once on a camp stage, and in thousands of showers. I can recite lyrics even now, from Hello Young Lovers, Whistle a Happy Tune, Getting to Know You, Shall We Dance, A Puzzlement, and more.

However, if I anticipated going to a favorite mushy, nostalgic old love story purely for escapist entertainment, a break from my other more thought-provoking plays of the week, I was mistaken. This was a brand new King and I, more like a “king-of-the-mountain’ competition than a love story. This was by far the most lush, sumptuous and extravagant of anything I’ve ever seen in traditional American Musical Theatre. A break-the-bank budget allowed for more than fifty actors, and gorgeous costumes and sets: huge, golden, cleverly designed and engineered miracles of stagecraft. From my fourth row bargain seat on the side of the Vivian Beaumont Theater, the prow of the ship bringing Anna Leonowens to Siam emerged from the wings to loom impressively over my head as it docked.

Super director Bartlett Sher (six Tony nominations in the past ten years) and his team made an active choice to explore the enigmatic duality of human nature. Their focus on historical accuracy, interculturalism, sexism, feminism, and sexual slavery was carefully staged to challenge the audience’s own preconceptions, and to call undeniable attention to the certainty that human cruelty and shortsightedness remain our concern in today’s “civilized” multicultural world. It’s contemporary relevance is clear. Still, it is in no way “preachy.” It’s a complex beautifully told story about attempts to break down such barriers, some successful, others not.

I like to think that no matter how magnificent the costumes and the sets, it’s the people we come to see, and Sher sought out the best for his reconsideration of this classic. He had worked many times with superstar Kelli O’Hara, notably eight years ago on the same stage, in his award-winning South Pacific. And he chose Japanese movie star Ken Watanabe  (The Last Samurai) to play King Mongkut.

Watanabe had been forced to leave the cast for emergency surgery and treatment for stomach cancer, but he was able to return to the role shortly before I saw the show. His performance was solid, and very effective, a self-contradictory man determined to retain control over a kingdom he badly wants to usher into modern civilization. O’Hara played a strong teacher, demanding of personal and professional respect, and yet at the same time charmed by the king and his eighty some children whom she was charged to educate.

The music, of course, was as good as it gets. The choral numbers and choreography were beautifully sung and staged. Three of the songs were particularly convincing, and beautifully rendered completely in character: The King’s Number One Wife, Lady Thiang (Ruthie Ann Miles), sang “Something Wonderful” as if the music were an integral part of the natural Thai language, and her satirical “Western People Funny” turned some cartoonishly racist lyrics into a national anthem of oriental pride. And with the powerful operatic voices of the “young lovers” Tuptim and Lun Tha (Ashey Park and Conrad Ricamora), “We Kiss in a Shadow” and “I Have Dreamed” became convincingly passionate serenades, tinged with desperation and fear.

The casting of the two stars was a publicist’s dream. Watanabe was far more dangerous a king than an adorable one, and his take created new extremes of tension between himself and Anna. Their “Shall We Dance” quickly shifted from fun to manic, leaving Anna with a “What-the-hell-have-I-done?” expression on her face, and adding a whole new context to the more traditional romantic waltz. Still, the king’s bravado was consistently undercut with an extraordinary vulnerability, especially in one of my favorite numbers, “Puzzlement,” in which he questions his own wisdom, power, and place in the world.

And last but certainly not least, there was Kelli O’Hara, often deservedly dubbed the queen of Broadway musicals. I had seen her work in South Pacific and Light in the Piazza, and was suitably impressed with both her beautiful voice and her strong sense of character. She fully deserves all the kudos and awards she has earned.  However, I must confess to disappointment in the space where her two talents meet up. I’m not sure whether it’s her choice or the director’s (Sher again in both productions), but there seems to be a less than subtle line of demarcation between when she occupies a role, and when she sings a song. It’s an operatic tradition for the soprano to step forward to sing an aria directly facing the audience. But what I have always loved about American musical theatre is that lyric and music flow smoothly out of dialogue and character, thus heightening the intent. To me, especially with today’s use of body mikes and sound control, dropping character and singing frontally to the audience seems a distraction from such a flow, as well as an indulgent bow to ego. I truly hope such practice is a throwback Sher/O’Hara quirk, and not a sign of a retro trend.  It was my one and only objection to an otherwise near perfect production.

UP NEXT: The King and I, a Personal Historical Addendum