On THE CURIOUS INCIDENT OF THE DOG IN THE NIGHT-TIME

Time out here briefly for a quick digression: The National Theatre production of  The Curious Incident of the Dog in the Night-Time will close on Broadway on September 4, in only three more months. I confess  I have not actually seen the New York production, which won Tonys last year for best play, best design, best actor and best director. However, three years ago, I was fortunate enough to see the virtually identical original at the Apollo Theater in London, (… only weeks before the ceiling collapsed in mid-performance. … No, really!!) (See my 24Oct13 entry).  The one in New York is at the Barrymore Theatre.  And I just can’t let that production go without giving it a plug. 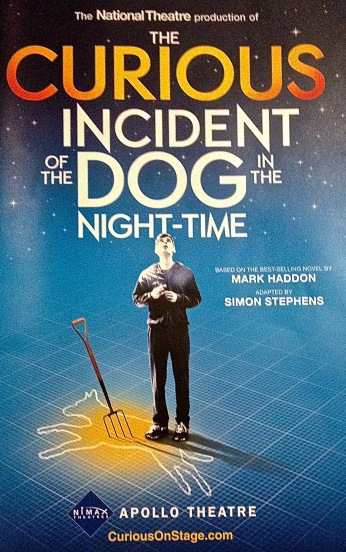 This is an experience no died-in-the-wool theater-goer should miss – the play, that is, not the ceiling collapse.   And you may not have to miss it. On August 1, tickets go on sale at the Kennedy Center for a run there this October 5-23. They’ll go fast. But I’m going to take a wild guess that Washington is the first city in a yet-to-be specified national tour of American cities. (You heard it here first.) So if it comes anywhere close to you, jump on it. The National Theatre also broadcast their original performance to U.S. movie theaters in 2012 and 2014. I hope we’ll get lucky enough for them to broadcast it again after the tour. Even so, this is one to see live on stage.

Why all the fuss? Well for one thing, when it opened in New York in 2014, critic Ben Brantley of the NY Times called it “…one of the most fully immersive works ever to wallop Broadway.” And Brantley doesn’t often gush.”  For myself, I have to add that it may well be the most thorough exploitation of the power of theatre I have ever personally seen on a stage. It has everything Aristotle ever dreamed of: Plot, Character, Language, Thought, Rhythm and  spectacular Spectacle!  More importantly, my wife Joan, a self-described fussy critic, labels Curious Incident (along with War Horse) as one of the most amazing plays she’s ever seen, citing the appeal of both plays to her core values.  More on that below, but I can’t top that.

Curious Incident is based on the bestselling 2003 novel of the same name by Mark Haddon –all the rage at the time. It was narrated in the first person by a fifteen-year-old boy showing symptoms suggesting autism and Aspergers syndrome. Christopher Boone’s unique computer-like brain is taken up with numbers and complex formulae.  He hates the color yellow and can’t stand to be touched.  With no social skills or ability to relate to others, he is looked upon as a freak. Yet despite his condition, he embarks on a journey to uncover the murderer of his neighbor’s dog.

Both the book and the play read like a Sherlock Holmes mystery, fast and furious, and full of suspense, strange characters, and an odd formality.  In fact, I’ve always felt Holmes himself was more than a little autistic.  The title  actually comes from a Conan Doyle short Holmes mystery story, Silver Blaze, about the disappearance of a valuable racehorse.

The book was touching, funny, human, empathetic, and at the same time convincingly realistic!  And because it was entirely an interior monolog, it was also deemed impossible to bring to the stage. Adaptor Simon Stephens and director Marianne Eliott,  also the director of the other “favorite play,” War Horse (See my entries of 9May11 and 21Jan12) … met the challenge brilliantly. They abandoned the outside world all together, and turned a virtually empty stage into the inside of Christopher’s brain, using projections, lasers, and one extraordinarily athletic actor. Alex Sharp took the 2015 Tony for playing Christopher, a role now being played by the (I am told) equally talented Tyler Lea.

The result of all this: While Christopher’s condition is never identified in the play as autism or Asperger’s, The Curious Incident of the Dog in the Night-Time offers us a significant insight into how an autistic mind experiences reality, and by extension, how a “normal human mind” perceives reality. But above all, the play is a genuine work of high theatrical art that could never be matched on regional stages with more modest budgets.   See it when you can.

COMING UP NEXT: Two plays that will competing for the honor of Best Play at the 2016 Tonys, on June 12;  The Father, and The Humans.