I’ve saved the absolute best of what I took in on my recent five-day New York Theatre binge, for last.  I had in fact planned the whole trip around this performance, and was most grateful the run had been extended.  An old friend and college roommate joined me for the evening, and we both came away feeling it was one of the highlights of our theatre-going careers. 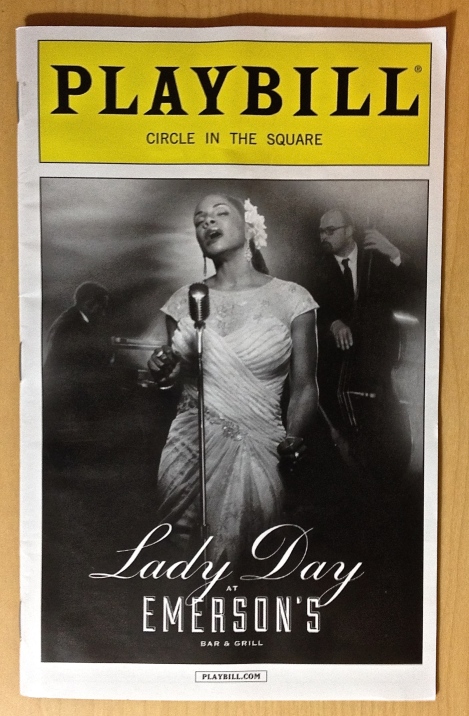 Lady Day At Emerson’s Bar & Grill was staged at the Circle in the Square, in a deep horseshoe configuration. The small stage was at the open end of the horseshoe, where we were lucky enough to be seated about twelve feet from Audra McDonald’s microphone. We were able to watch her entire performance in intimate profile, just as if we’d been crammed into that tiny Philadelphia bar to hear one of Billie Holiday’s final performances.

You might well ask how can one performer be so very talented as to garner six “Best Performer” Tony Awards (a record) since 1994, when she won for playing Carrie Pipperidge in Carousel at the age of 24.  … Especially when the competition with both talented veterans and newcomers has been so fierce … And especially since the more she won, the more the judges must have been thinking, “She’s had enough awards. Let’s give it to someone else this time.”  The answer is, they couldn’t.  Audra McDonald is simply that good in this role, just as she has been in her other numerous and varied performances in concert and on stage, screen, and TV.

And from the time “Lady Day” entered at the top of the horseshoe at the Circle in the Square, clearly “under the influence,” we knew that.  As she stumbled her way down to the stage, alternately spewing both love and rage at the audience, we were already under her spell.  Her pianist, Jimmy Powers, wonderfully played by Shelton Becton while leading a dynamic jazz trio, sat practically on top of us.  He bore all the wild mood swings, tirades, and gratitude she vented on him with admirable patience and skill, and he more than once rescued us all from the doldrums of the blues.

Although Holiday is widely considered one of the greatest jazz voices of all time, I had been only vaguely familiar with her career. I recently picked up a CD of her best known songs, and have grown to love them. What a remarkable performer she was: Wracked by alcohol, drugs, racial discrimination and life’s hard knocks, she toughed it all out, persisting against long odds, and never once yielding to self-pity or victimhood. Only months after her appearance at Emerson’s in 1959, she would die in New York of cirrhosis and heart failure.

McDonald, whose voice is if anything even richer than Holiday’s surviving recordings, brilliantly covered fifteen of her familiar songs, including What a Little Moonlight Can Do, Crazy He Calls Me, God Bless the Child, ‘Tain’t Nobody’s Bizness, and especially, Strange Fruit.  I have never heard or witnessed a more moving rendition of the latter song than hers.

Southern trees bear a strange fruit,
Blood on the leaves and blood at the root,
Black bodies swinging in the southern breeze,
Strange fruit hanging from the poplar trees …

I think I must have been an idealistic college boy when I was first deeply moved by Josh White’s rendition of this song.  But the masses first heard it introduced back in 1939, from Billie Holiday.  It would later be associated with the Civil Rights protests of the 1960’s, and was further popularized by Nina Simone in 1965.

Strange Fruit has weighed heavily on our hearts and consciences  for generations.  I was once told it had been penned by Langston Hughes, which seemed to make sense at the time.  But ironically, Holiday was given it by a white schoolteacher from the Bronx named Abel Meeropol, who had been haunted by Lawrence Beitler‘s graphic photograph of an infamous 1930 lynching.  Incidentally, Meeropol and his wife were the same couple who much later would adopt their sons Robert and Michael, after the boys’ birth parents, Ethel and Julius Rosenberg, were executed as Russian spies in 1953.

When “Lady Day” decided to sing Strange Fruit, the song reached millions of people.  In 1999, Time Magazine dubbed it the “Song of the Century.”  And when Audra McDonald sang it in Lady Day at Emerson’s Bar & Grill, her cheeks soaked with tears, it deeply and agonizingly moved everyone of us in the audience.  In an interview, McDonald pointed out that Holiday could never sing a song to which she was not emotionally attached, and it was clear to all of us that these two great voices had merged into a single great spirit.