It’s not always easy to find theatre on a Sunday night. But this is New York, after all, and there’s ALWAYS theatre.   It was a beautiful night, and I had toyed with seeing John Lithgow’s King Lear up at the Delacorte Theatre in Central Park, about which I had heard raves.  But I’d missed out on the ticket lottery, seen a lot of good Lears of late, and didn’t feel much like spending time standing in a line.

So I settled for an oldie: The Fantasticks.  “You did what?  You gave up John Lithgow for The Fantasticks?  Are you Crazy?” commented my good wife.  I plead guilty.  It was not one of the saner choices in my theatre-going experience.

After 54 years and over well over 20,000 New York performances, surely there is nothing about this show that has not already been said.  It is the longest running musical in history.  It continues to be produced all over the country and the world, Music Theatre International’s most popular item.  I have friends who have never seen it, but it begins to feel like they’re in a distinct minority. 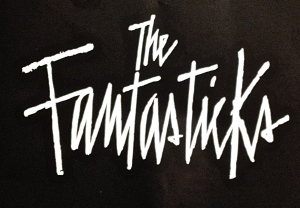 I myself had never seen it in New York, and I had been very slow in coming to it as a “favorite.”  Back in the 60’s, my wife and I made an attempt to see it in a Boston theatre set in a tiled hotel lobby.  Not being fans of slapstick comedy for its own sake, we thought the first act was so bad, so hopelessly overacted, so puerile in its content,  so irrelevant to the world, that we left during the intermission.  Of course, we missed the whole point.  For years I wondered what all the fuss was about.  Why should The Fantasticks, of all plays, become the most popular, longest running musical in the world?  … And I have to admit:  I still have no clue!

But then in the mid-70’s, I directed a school production and toured Vermont with it.  I came to love the music, as well as the simplicity and the honesty of the story, with its clashing imagery of idealism and cynicism.  With age I grew more in tune with its very basic exploration of what we expect from life and what the world ends up handing us.   So finally, it was time to go see a professional production … both acts!

The current The Fantasticks is staged at the corner of 50th and Broadway in the 3rd floor hole-in-the-wall Jerry Orbach Theatre, so named for the late Law and Order star and the very first El Gallo when the play debuted in 1960.

It was pretty much as I remembered it, and pretty well done.  There is one major change in the script, brought about by the demands of political correctness, and officially sanctioned by Jones and Schmidt.  The “Rape Ballet” was no more, having been replaced by words like “raid” and “abduction.” The classical use of the word “rape” was intended to be much closer to the original sense of bridal kidnapping, or a raid. But no more. In this day and age of commonly talked about sexual abuse, “rape” is not deemed a word to play with for laughs. I confess to missing the “Rape Ballet,” and while I fully understand the need to replace it, I find it very sad that, even on a New York stage, even surrounded by plays full of hilarious obscenities, we apparently live in times where it had to go. 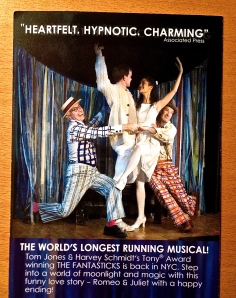 It seems like “everybody and his brother” (actors, that is) come around to playing in The Fantasticks sooner or later, and I’m sure casts are continually rotating according to actor availability.   The list includes many future Hollywood and Broadway stars.   Not surprisingly, everyone in this cast had marvelous voices, and a fair modicum of acting talent.  On the other hand, energy, level of commitment and ability to relate to the material varied widely.  For instance, shining over them all was Samantha Bruce as the Girl, Luisa, who was not only in rare voice, but captured every nuance of character and timing.   By contrast, the young actor playing “The Boy,” despite being in fine voice and bringing some impressive credentials to the role, appeared somewhat disconnected from the whole process.  In general, though, it was a fun evening of fine voices and not a little personal nostalgia.

One niggling thought to clear up:  One of the Broadway discount ticket sites inexcusably lists the lyricist Tom Jones as Tom Jones, the Welsh pop singer of the ’70’s (“Delilah,”  “It’s Not Unusual”).  Decidedly, NOT SO!  Our own Tom Jones was born in Texas, and since college has successfully teamed up with his friend Harvey Schmidt for such Broadway hits as I Do, I Do, 110 in the Shade, and of course, the longest running musical in the world.

2 Responses to THE FANTASTICKS, Book & Lyrics by Tom Jones, Music by Harvey Schmidt