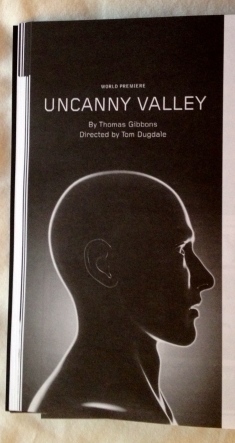 Yesterday’s noontime matinee was performed in the little Studio 112 Theater at Shepherd University.  It is equipped with an entire stage on wheels, floored about a foot off the ground, and facing a floor-to-ceiling steeply raked wall of audience.  A magical room for fine theatre to be a-borning: Intimate, moveable, completely flexible, and fascinating.

We sat in the front row, just a few feet from two astounding actors: Playwright and actor Barbara Kingsley, who with over 200 professional stage appearances from Broadway to LaJolla, would be a familiar face to any decent theatre addict, plays computer programmer Claire.  And Alex Podulke is back from last year, having acquired credits from all over the country, to play Julian, a very personable human-like robot.

I have to admit that based on the advance write-ups, Uncanny Valley was the play from which I expected the least. I’m not an especially avid science fiction fan, and the robots in my head, with their monotonic HAL/Robby/Klaatu/R2D2 voices, are actually pretty boring. (I know, I know: R2D2 squeaked, and Klaatu was the humanoid, not the robot, which didn’t speak at all. There, I’ve given myself away.)

I could not have been more wrong in my prejudice. What Thomas Gibbons has crafted in Uncanny Valley has little to do with science fiction.  Instead, it is a perfect little story documenting the evolving relationship between the constructed human-robot Julian, and Claire, his programmer/trainer.  It is also a quiet little parable about the desire to achieve eternal life, the increasingly blurred little valleys between life and death, and the mysterious gulfs between parents and children.  The process of Julian’s education, and the introduction of his emotional capacity are extraordinarily touching.  So is Claire’s growing maternal affection for this “machine,”  which is beautifully revealed with the gift of Julian’s legs and the talk of her own daughter.

But the big question of the play comes after the training, the downloads, and the mechanical challenges have been completed.  Who/what is Julian? And what are the ultimate moral and legal consequences, the costs of his existence to human society?  The play leaves us debating many urgent questions it does not attempt to answer, merely mapping out a road to some fascinating critical issues that science will force us to deal with much sooner than we think.  The work going on in the play is being explored in today’s laboratories.  Take a look on line at Bina48, or Russian billionaire Dmitry Itskov’s 2045 Initiative.  Or as was recommended by a physicist friend and fellow audience member, pick up a copy of  Robo World: The Story of Robot Designer Cynthia Breazeal.

As a playwright and director myself, I had only two objections to an otherwise superb theatrical experience.   A very bold decision is made late in the play, intended for theatrical impact that I found distracting.  It feels more like a concept director’s decision than a script matter, but I could be wrong.   I can’t be more specific without compromising the story;  suffice to say, I thought the questions raised in the dialogue itself were sufficient challenges without cluttering the matter up with an obscure gimmick.

If I were to admit it, my second concern comes down to sheer envy:  I agonize over writing a play.  I deal with laziness, writer’s block, clutter, and endless rewrites. Gibbons makes the whole process feel like a cake walk.   I mean … come on!  The guy walks into a dentist’s office waiting room and picks up an  article in National Geographic.  And two weeks later he has laid out this little gem?  It’s downright “uncanny!”