Compromise!  That’s a big word these days.  President Obama came into office on the promise of compromise, which I always thought was a good word, until the opposing party transformed it into something akin to appeasement, as “nefariously practiced by British Prime Minister Neville Chamberlain before World War II.”  As a result, here we are with a completely uncompromising case of political extremes in Washington, bogged down in accusations and blame, neither side listening or talking to the other, while Americans wait, and suffer the consequences.

And so Pulitzer Prize-winning journalist Lawrence Wright has written an extraordinary play about the art of compromise: Camp David, now playing at the Arena Stage in Washington through May 4.

Camp David is about events that happened more than 36 years ago, during thirteen days at the Presidential retreat in Maryland’s Catoctin Mountain Park.  Jimmy Carter, the peanut farmer from Georgia and Washington outsider, became the 39th president of the United States in January of 1977.

In narrowly defeating Gerald Ford, he inherited a disillusioned America, still angry over Watergate, and even angrier over an economy in recession, soaring gas prices, and rapidly declining American prestige abroad.  The sense of hopelessness and defeat was the beginning of what Carter would come to call America’s crisis of confidence, later expressed in what others would call his “malaise” speech.

You remember the next year, don’t you? 1978? At least some of you?  We were all still conducting nuclear tests.  The world went through three popes. Grease, Hello Dolly and Deathtrap opened on Broadway.  Kurt Wallenda fell to his death from his high wire between two hotels in San Juan.  Dallas premiered on TV.  Roman Polanski skipped bail and the country, and the Panama Canal reverted to Panamanian control. (Okay, that’s enough history; I’m feeling historical.)

But in the middle of all that, Jimmy Carter, the idealist, pacifist and devout Baptist, got tired of waiting for peace in the Middle East, and took it upon himself to invite Menachem Begin and Anwar Sadat to sit down with him at Camp David and talk peace.   At that point, nobody believed that would ever happen.  So we paid little attention to the little “summit.”  It was considered Carter’s pipe dream, and Americans wanted their president back in the real world, in Washington [???], to fix the economy and bring down the price of gas.

And yet, after thirteen days of isolation, all parties emerged on Sep. 17, 1978, to sign the Camp David Peace Accords:  Peace between Egypt and Israel!  And they all shook hands … in public, on camera!  Unbelievable!  Of course everyone then started squabbling over details, and refusing to ratify the Accords, because what about Palestine, etc.  Still, in the almost 36 years since that time, the essence of the Accords has never been violated.  How many thousands/millions of lives were saved on that day?  It was an extremely rare day of success for the peacemakers of the world.  The three men deserve enormous credit and gratitude that has never really been adequately expressed in their own countries, including our own.  Despite Carter’s good deeds, the honesty of his “malaise” speech, the Panama Canal negotiations, so many demonstrations of humanitarian concern, and his diplomacy winning the release of the American hostages in Iran, his presidency and his presidential reputation went down to Ronald Reagan.  Hence this play.

Yes, I am talking about a play, after all … but one very difficult to separate from its historical background.  We all know the ending of course.  But we know the ending of all Hitchcock films too, and that never stopped us from sitting through them.   The play achieves enormous suspense, and constant surprises.  And until the very last minute, despite our real-world knowledge of the ending, we’re not sure these guys are going to make it work.  Begin is just too blind-sided and stubborn to compromise. 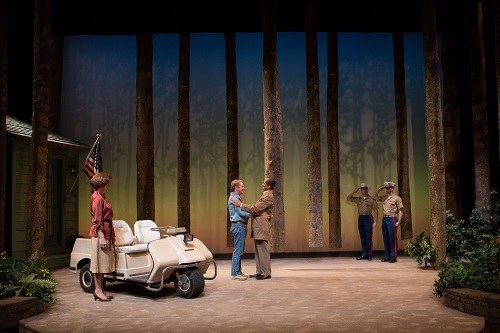 Hallie Foote as Rosalynn Carter, Richard Thomas as Jimmy Carter and Khaled Nabawy as Anwar Sadat with Will Beckstrom and Will Hayes in Camp David at Arena Stage at the Mead Center for American Theater March 21-May 4, 2014. Photo by Teresa Wood.

The production was directed by Arena’s Artistic Director, Molly Smith, on a beautiful semi-expressionistic set designed by Walt Spangler (Although I could have done without the golf cart and the superfluous projections).  We get to watch a superb cast bring all this off: Richard Thomas (reaching well beyond his familiar John-boy persona) as Jimmy Carter, Hallie Foote (Horton’s daughter) as Rosalynn; Ron Rifkin as Prime Minister Menachem Begin, and Khaled Nabawy as President Anwar Sadat.  All were wonderful; Rifkin’s performance is outstanding!) 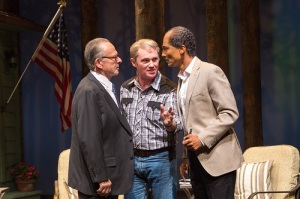 (L to R) Ron Rifkin as Menachem Begin, Richard Thomas as Jimmy Carter and Khaled Nabawy as Anwar Sadat in Camp David at Arena Stage at the Mead Center for American Theater March 21-May 4, 2014. Photo by Teresa Wood.

There are also two marines, who serve merely as part of the set, but that’s it.  In the real world, of course there were dozens of Egyptian and Israeli advisors cluttering up Camp David, but Wright limits his cast to the four principals.  These three men, sometimes defying their advisors and lieutenants, are the ones who took the enormous personal and political risks that made it happen.  And Jimmy would be the first to acknowledge that he might well have given it up and called it off but for the advice, support and encouragement of Ros.

Naturally the play cannot be experienced out from under the shadow of contemporary Middle East peace talks: John Kerry’s thus far futile shuttle diplomacy, now complicated by the issues of Iraq, Iran, Syria, and the other Arab states.  And then there’s the nose-thumbing stakes-raising “diplomacy” of the powers-elite over Crimea and Ukraine, which threatens to set us all on a path to WWIII.  We can only hope that underneath all this fray, there is someone working for us with the courage and conviction on display in this play. …Someone who understands that not all of us can have it all! …Someone who gets “compromise”!

Camp David is not a perfect play yet, but it may well be on its way to being one. There are some overly simplistic platitudes and repetition to be dealt with. But the core of the play is dynamic, and just when I might have suspected some melodramatic playwright manipulation, (Begin’s ultimate manner of yielding to the pressure, for instance), I find out that truth is truth, and definitely stranger than fiction. Wright’s play is ultimately about our core love for family, and our desire to create a better and safer world for our children. There are few higher goals. It turns out to be a touching play about the best of humanity, and about the universal frustrations of being merely human.

Camp David will close next week after the May 4 performance. Nowhere near enough people have seen it yet. But judging from recent patterns established by Arena, I suspect (hope) the production will go on to earn a spot on Broadway. And we’ll all have another chance.