I’M BACK: GETTING NEAR TO BABY

I know, I know.  It’s been a long time.  I’ve been coaxed by friends to get back in the saddle and start writing again.  Everybody tells me if you’re going to enter into this blogging business (which already sounds like a lost word from a past generation), you have to do it all the time. You have to be consistent!  Me?  I’ve made no entries since last October.  Aye-aye-aye!

Ah well, I’m here now, and kind readers will simply have to put up with my inconsistencies.  After all, I’m not in the game of finding record numbers of readers.  Folks will find me or not based on interests and word of mouth.  And I’m very glad you have.

Anyway, I hope I’ll be making it up to you on this next round of theatrical explorations.  There’s some good stuff coming up:  Up in Washington, Joan and I just saw the brilliant Hal Holbrook in Mark Twain Tonight, followed by a new play, Camp David, soon to be much talked about, I’m sure.  I’ll be in New York next week to see Act One and The Realistic Joneses.  And coming up in July, Joan and I will go back this year to see all five new plays at the Contemporary American Theatre Festival in Shepherdstown, WV.  That’s a lot to chew on, so stick with me folks – and by all means, sign up over there on the right side of the screen to be notified when I post new entries.  Don’t worry: I am surely not going to plug up your mailbox.

Meanwhile, I’m going to violate my own blog guidelines for my first post in six months, and talk first about what my one-track mind has been up to.  I was asked to direct a play called Getting Near to Baby at Live Arts here in Charlottesville.  The play was written by Y. York, based on a young people’s novel by Audrey Couloumbis. It picked up a Newbery Honor back in 2000, and has become quite a popular read among the middle school set.

At my age, I was at first reluctant to take on a “children’s play,” until I discovered it was anything but childish or glib. Instead it was  a very serious play about pretending to be in control of what we’re not.  It was also a very funny play about grief, loss, blame, guilt, … death? … all contradictions I’ve long found personally intriguing.  And after all, I worked for many years as a drama teacher, and I missed teaching and working with youngsters.  So I said yes.  And I’m glad I did.

We started rehearsals in November, and opened in February. I got to work with a dynamic cast of eight, five of whom were thirteen and under.   My youngest was eight, and sought to steal the show every night with her one line in the play.  She would have, too, had she not been more than matched by the extraordinary talents and dedication of the other four young cast members.

Getting Near to Baby tells the story of two young sisters following the death of their baby sister, poisoned by bad water at a North Carolina carnival.  Their grief-stricken mother has abandoned them to her own sister, who has no idea how to be with children, and the girls are left on their own with their complicated issues of guilt and anguish, and the challenge of moving on with their own lives.

To me, the subject matter could have not been more timely or appropriate.  No matter how well we hide from the subject of death; no matter how adept we may be at denial:  It’s there.  It screams tragedy at us from our television sets.  It lurches unexpectedly into our consciousness on the sudden death of a good friend, or the slow passing of a beloved family member.

And hasn’t this been a year for it?  We continue to endure a horrifying onslaught of school and mall and theatre and street shootings and slashings. We’ve witnessed monumental calamities of nature. 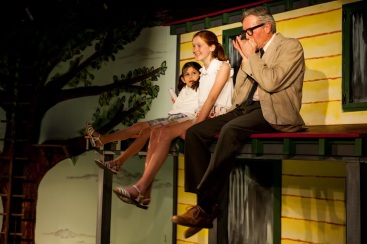 We’ve lost cherished spouses, sons and daughters to war, and witnessed millions of innocent children succumb to starvation, illness and violence, robbed of a lifetime of possibilities.

And yet, like the Getting Near to Baby girls, we persist.  We go on to breathe and laugh and love again.  What marvelous creatures we are to be able to do that: To pull back from grief at the absurd loss of an innocent baby, and lay to rest the equally absurd notion that it was somehow our fault; to abandon our guilt and shame.  Sorrow remains, but eventually we can speak of it.  We can seize the balm of joy, and embrace life again.  Very gradually, we can come to smile again, and then to laugh, and then to dance and sing.

During a completely sold-out run back in February, it was with this warm and positive message that audiences of all ages left the theatre.  Maybe it comes easier with the elasticity of childhood.  And maybe we adults need to see through the eyes of our children that we are all ultimately survivors.

All photos courtesy of Martyn Kyle

“I believe in the power of the imagination to remake the world, to release the truth within us, to hold back the night, to transcend death, to charm motorways, to ingratiate ourselves with birds, to enlist the confidences of madmen.”

Like Loading...
This entry was posted in Theatre and tagged Audrey Couloumbis, Y York. Bookmark the permalink.

4 Responses to I’M BACK: GETTING NEAR TO BABY