Many years ago, Joan and I were living in northern Vermont, and I was in the early stages of my theatre binge trips to New York.   Friends and early pre-internet research persuaded me there might actually be a cheaper way to indulge my habit:  London.  New York prices for both theatre tickets and hotel rooms without fleas and bedbugs were climbing out of range.   A cheap transatlantic flight, a weekly rate at a reasonable London hotel, and still great ticket prices might yield a richer theatre experience at a lower cost than could be had by flying down for a week in New York.

Surprisingly, depending on the exchange rate, and ignoring of course the hassles of flight, jet lag, etc., it all worked for a couple of years.  As the dollar fell and West End prices rose to New York levels, it maybe made less sense.   Still, London is one of the more fascinating cities in the world, and I’ve come to love it.  And for a drama addict like me, what’s a few pence for a place like this?  So…  with five pairs of theatre tickets and one pair of concert tickets in hand (all coming up for postings in the next few days), in spite of the dollar’s poor showing, after eight years, we’re back!!!

Furthermore, at times like this, honestly, it feels awfully healthy to get out of the “good old U.S. of A,” and find some perspective on the real world.  Not surprisingly, the rest of the world is currently both astonished at and not a little afraid of the embarrassing spectacle that is government in America right now, threatening as it has been to shut down altogether, renege on its debts, and drag the whole planet into a deep depression with us.  The U.K. is “depressed” enough as it is.  Our “settlement” has offered little assurance that the same hard heads won’t repeat the process in January with still direr consequences.

I am not so naïve as to believe that insanity doesn’t exist outside the halls of the U.S. House of Representatives.  I fully realize that people are people everywhere, and that the world is full of crazies, victims and heroes, along with ordinary people just trying to get through their lives.  But despite the cab driver who “took us for a ride” coming into London from Heathrow, despite the rental flat being not quite up to what we had expected, and despite our both being hampered by bad colds, there’s something very refreshing about being in the U.K. right now.

I was recently told by a friend (too late), when our heads began to ache and our colds were first beginning to bloom, that London in October is a vast petri dish, packed with great new germ varieties seeking fresh blood.  We’re already on the eve of returning home, and I admit the colds have been a real drag.  Joan has missed out on some plays as a consequence, and others have no doubt been underappreciated.   Most of all, we missed spending more planned time with good friends. 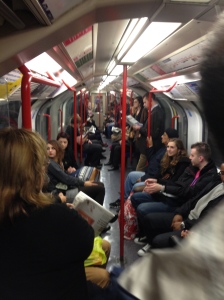 And … I remember now:  NEVER hail a metered black cab in London if it can be helped.   We’ve found the busses and tube to be hyper-efficient, and especially economical with Oyster Cards.   And especially NEVER, NEVER take a cab at Heathrow, where you’ll probably arrive amidst the London traffic hour.  These days, you can order up a car in advance for less than half the price (Swift Cars, and others).  And if you’re not loaded down with luggage for two weeks, hop on an express train to be in the center of the city in 15 minutes, not 2 hours.

STILL, we’ve loved being here.  I knew we would from the first day we turned on the “telly” to watch the Prime Minister being questioned in the House of Commons.  The issue of the day:  badgers!  There’s a TB outbreak among the badgers in Gloucestershire, and they’re shooting them.  But apparently they’re not shooting enough of them.  Meanwhile there is great consternation among the lovers of Mr. Badger in The Wind in the Willows and Beatrix Potter’s evil Tommy Brock.  And after all, there’s a badger on the Hogwarts school coat of arms.

Okay, so it’s not earth-shattering news, but it’s a whole lot better than the barrage of non-news perpetrated as time-fillers by American networks.  And somehow, punctuated by smiles and humor,  it feels like so much healthier a debate than the bitter head-shaking going on in Washington.  England is a tightly run state, with “spy” cameras everywhere, especially in the city, and constantly on edge because of the threat of terrorism.   In fact, there was a terrorist arrest just around the corner from our flat the first Sunday we were here.  Yet the various BBC networks, Sky, and ITV all seem to suggest an establishment that understands the realities of life here.  They constantly deal openly and sensitively with the real issues of environment, poverty, joblessness, class issues, price rises, privatization, the arts, loneliness, and what’s going on in the other countries of the world.  And despite what I expected from the tabloids, the networks seem to keep to a minimum their coverage of all the various affairs, scandals, and juicy murders.

And speaking of the “telly,” (Eat your heart, out my fellow Americans), thanks to ITV and ITV Catch-up” we will come home five episodes up on Downton Abbey – a good thing, since I’ll probably be in rehearsal when they show up in the States.

Last word for today:  Thank you, American tax-payers, listeners, and watchers, for providing us all with National Public Radio and PBS, without which we would be lost as a nation!