On Revivals: “Golden Boy” and “The Heiress”

That was a quick five days.  Headed home on the train already, and as usual, more than ready for it.  But what a week!  It’s true that Broadway theater has of necessity sold out to the tourist industry.  One look at the Sunday New York Times theater section demonstrates that the vast majority of offerings are musical crowd pleasers, thematic variety shows and tributes masquerading as plays.  An online glance at what’s happening on London stages reveals the same trend.   Still I have no dire predictions that we are heading toward a theatrical wasteland or that true meaningful theatre is dead.  It’s just that times are hard, the need for shallow entertainment is high, production costs and therefore ticket prices are exorbitant, and good plays like The Other Place and Tribes are harder to find.   That’s where we are on the cycle.

In spite of it all, though, it does occasionally seem we are at the beginning of new era of exciting classic American revivals:  The Heiress, Golden Boy, Picnic, the apparently perennial Cat on a Hot Tin Roof,  Glengarry Glen Ross, Who’s Afraid of Virginia Woolf? all on top of  last year’s Awake and Sing,  Anything Goes, Porgy and Bess, and Streetcar?   What fun!  Production costs for straight plays can be considerably lower.  And there is name recognition in revivals.   For those,  —  “they will come,” … at least in sufficient numbers for a limited run, and especially if you wave a Hollywood star at them.  And there are, thanks be, always exceptions. 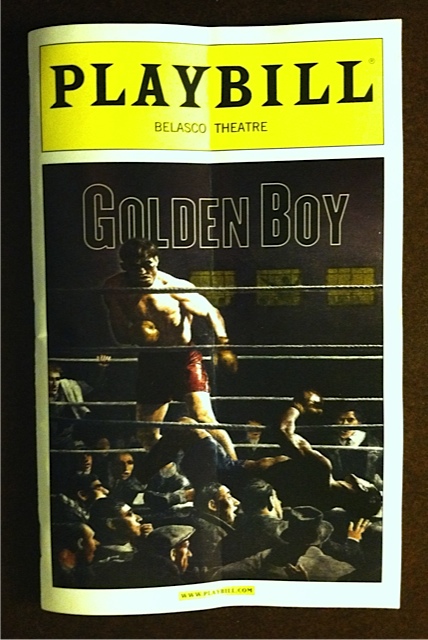 Clifford Odets’ “Golden Boy” originally appeared on Broadway in 1937.  Back in 1961, when I was preparing for my second attempt to graduate from college, ALL of Odets was on my personal reading list.  I think it was Paul Green himself (whom I had interviewed for my college thesis), who insisted on my getting familiar with Odets’ tremendous influence on American theatre, even when the man was still presumably writing and directing.  Joan and I saw the memorable Sammy Davis, Jr. musical version of Golden Boy in 1964 (I still have the Showbill).  Sadly, I missed seeing last season’s revival of the Odets’ “masterpiece” Awake and Sing.   But now we have another, by the same director.  Good for Lincoln Center!  The chief reason I came on this trip on this particular week was to catch this production before it closed.  As I write these words, its closing performance is about to begin.

Odets is on every list as one of America’s great playwrights, right up there with O’Neill, Miller, Williams,  Wilder, Albee and their ilk.  Yet it’s relatively hard to find productions of his plays these days.  Why?  Too radical?  Too communist?   Like many, he had been briefly a member of the party, and far more notably he was one of the original founders of the Group Theatre.   But … in the face of a looming far right, are we now again suddenly craving radical social consciousness?  Two of his master works in two years?

Despite, or rather because of, the more formal and florid “gangster” language of the 30’s, this production felt very universal, and therefore contemporary.  The colorful  talk held up well in an era of urban poetry, providing somewhat Shakespearean rhythms and metaphors  to its street talk.  The sets flew in and out and back and forth as fast as film cuts, allowing director Bartlett Sher to choreograph his large cast of twenty-five flawlessly.  You don’t see that very often in today’s theatre economy.  And the essential conflict of the play between our creative desire to be original and our desire for material gain, be it money or “getting on top,” will never be outdated.  The lead role of Joe Bonaparte, who progresses from shy, likable violin prodigy to loud, obnoxious and self-important boxing wunderkind, was played by Seth Numrich, who had done such a fine job as Warhorse Joey’s faithful friend, Albert.  Numrich apparently undergoes  daily lengthy workouts in an alley behind the theatre that make him completely believable as a boxing champion.  He is slim, mean, and driven — looks, dances, and slugs like a pro in a performance that no doubt took weeks and months to prepare.  As his very gentle but disapproving father, Tony Shaloub (remember TV’s “Monk?”) also turns in an outstanding performance, as do Danny Burstein, as Joe’s trainer and Yvonne Strahovski as Lorna Moon.  Oh hell, they were all great!

What’s exceedingly different in this production is the amount of blood on display to remind us that extreme pain and ignominy are essential ingredients to “being on top” in prize-fighting.   Wherever possible, it flows, drips and spatters.   No doubt about it these days: blood is IN!  But don’t get me started on that … yet.  (I feel a rant coming on.).  Okay, I get it:  We are willing to suffer any degradation, sacrifice any righteous instincts set aside our loves and loyalties in order to be a “winner,” and damn the consequences.

This play and “The Other Room” could not be more different in style and story, but what they both have in common is this need that drives us all to be “the best,” to be on the “top of the game,” which of course we never are.    The stage is a place presumably devoted to telling us the truth about ourselves.  And what is so fascinating about the process when we step outside ourselves to look at it on stage, is that we come to understand the lies, the delusions, the denials and the distortions we invent to convince ourselves of our own “truths,” no matter how little bearing they may have on reality.   How hard it is to know ourselves! 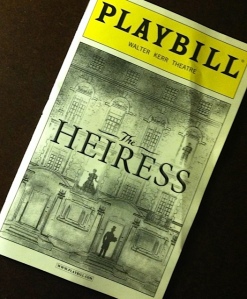 Much the same themes can be found in the other current revival, “The Heiress,” a play by Ruth and Augustus Goetz, first staged in 1947.  It is based on the Henry James  1880 short novel, Washington Square.   The play and the novel speak directly to the question of “Who are we really?” as opposed to who other people think we are or who we might seem to be on the surface, or who we perceive ourselves to be.  In this case, the party in question is a wealthy New York doctor’s daughter, who appears to lack any social skills whatsoever, and who thus falls prey to a fortune-seeking cad.   After being painfully jilted, she gains sufficient confidence and poise to turn the tables, helped along by the newly acquired inheritance from her father.

Once again, this is a sumptuously staged production, with magnificent costumes  and enough mahogany and crystal to satisfy the most demanding of Henry James enthusiasts.   In keeping with the current trend to hire Hollywood names in order to assure enough butts in seats, (just as they’ve done with Scarlett Johansson as Maggie the Cat in the just-opened Tennessee Williams revival), for The Heiress they’ve invited Jessica Chastain to play the title role.  I know how difficult it must be to play a mousy character on stage without appearing to be a mousy actor.  (The actor’s dilemma:  how do you make a bored character be fascinating?)  Despite some critical praise, I have to say that I personally felt Chastain was totally lost in this production.  Her out-of-context style of speaking, her volume, her projection, her presence, and her bearing were all more suited to filmdom.  I know the character is supposed to be bewildered, but Chastain’s interpretation seemed completely divorced from and non-reactive to everything going on around her,  accustomed as she is to short out-of-context camera shots.  In fact, as I watched this stage performance I was reminded that only two nights earlier she had received the Golden Globe “best actress” award for her work in Zero Dark Thirty — fully deserved, I’m sure.    Ah well, she gets an A for sheer courage, and she has only 17 days left in which to face live audiences.

Her nemesis on stage, with whom she falls in love, is played far more appealingly by Dan Stevens, currently Matthew Crawley, the “heart throb”  in the much vaunted Downton Abbey TV series.  He’s the one the girls line up for at the stage door, and he really is quite good as a kind of doppelgänger for his Downton role.  He may look and dress like Crawley, but he’s an American-accented, scheming, lying rat!

However, neither of these two box-office draws makes this production the success it is.  Instead, give credit to old pro Judith Ivey, in the relatively small role of Aunt Lavinia, who from her perspective serves to bring out all the hypocrisy and deviousness of the household.  And in the most difficult role of all,  David Strathairn is Dr. Sloper, who loves his daughter but can’t show it, disabused as he is by her plainness and social awkwardness.  He can only seek to save her from herself  by preventing her marriage to  a man who only wants her money.  He carries a lot of his own emotional baggage that prevents him from displaying any affection for her. But he loves her enough to sacrifice both his own and his daughter’s happiness and loses her forever …  Tough to play!   Strathairn is superb at capturing all the contradictions of his anguish.  He alone is worth the price of admission.  In the program credits, he lists only his ample stage work, but I’ve long been a fan of his  film work, a long list including an Oscar-winning performance as Edward R. Murrow in Good Night and Good Luck, an English teacher in midlife crisis in the little-known gem The Sensation of Sight,  and most recently, William Seward in Lincoln.   In The Heiress, Dr. Sloper dies of something like the flu which is currently epidemic in New York.  So effective was Strathairn in portraying his condition that I could not tell whether he was himself afflicted.  If he was, his performance was all the more impressive.