The Contemporary American Theater Festival has been going for 22 years, in the West Virginia panhandle town of Shepherdstown.  And for most of that time I’ve been promising and planning to go.  I’ve actually submitted scripts in the past for their consideration, not evidently their cup of tea —­­­ yet.   Well, finally last week, Joan and I got around to taking a look for ourselves.

Shepherdstown is a well-preserved historic little village, lying along the Potomac River just north of Harper’s Ferry, and about seven miles from the battlefield at Antietam.  It is the home of Shepherd University, which is in turn the host for the Contemporary American Theater Festival.

You have to ask “Why here?  How did this happen?  A wildly popular major festival of some of the best new avant-garde plays by American writers, in this seemingly remote, tiny, picturesque village?”   And the answer is, as always, someone with a lot of talent had an ambitious creative vision, the energy to develop a team to see it through, and the support of a state institution.  The “someone” in this case is Founder and Producing Director Ed Herendeen, to whom we all owe a debt of gratitude.  His mission:  To embrace risk, to find, develop and produce innovative and daring new American plays that tell diverse stories, and that have a profound lasting impact on audiences.

This season he has assembled five playwrights, ranging from experienced hands Neil Labute and Bob Clyman to talented newcomers Johnna Adams, Evan Wiener, and Bess Wohl.  They are supported by an astounding company of talented actors, directors, and an enthusiastic production team of pros and dedicated youngsters.   By way of local interest, Labute’s new play, In a Forest Dark and Deep, features in its cast Johanna Day, late of the Broadway cast of August: Osage County and so much more, sister of Charlottesville jazz musician Vincent Day, and sister-in-law of our own talented singer/actor Dinah Pehrson.

For our inaugural visit to the Festival, we picked the world premiere of Barcelona, by Bess Wohl.   It paid off:  a 90-minute, funny, intriguing, thought-provoking little play, superbly acted and directed, with a lot to say about human nature, family, sex, American values, and religion.   The play is set in Spain’s second largest city, the Catalonian Mediterranean city of Barcelona, literally in the shadow of  Gaudí’s “warped Gothic” Sagrada Familia Cathedral, which has been under construction for the last 130 years or so —­­­ all of which proves to have relevance in the play.

Irene, played by Anne Marie Nest, is an American tourist in Spain engaged to her boyfriend back in the States.  Yet she goes home with a tall dark stranger after her bachelorette party, more than a little tipsy.  What starts out as a last carefree, lust-filled one-night stand, rapidly turns dark.  Turns out the stranger’s daughter was one of the 191 death resulting from the 2004 terrorist attack on Madrid’s commuter trains, a day known in Spain as 11-M.  As a result, he hates Americans and their obsession with war. 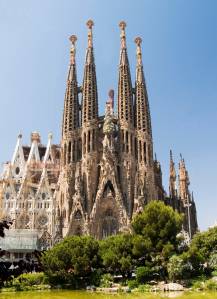 Nonetheless, the true character of this handsome Spaniard, beautifully played by Jason Manuel Olazabal, is revealed only reluctantly, as is that of Irene.  She begins as an embarrassingly familiar cliché of the crass American tourist, but when it slowly dawns on her that she may be in over her head, she undergoes a radical transformation, passing through a wide range of emotions that make her a far more complex and compelling character.  True … Just when, why and how she turns herself around to reveal a hitherto unsuspected political savvy and personal sensitivity is not particularly clear.  But then again, it’s not always clear in real life either.

Bess Wohl earned her MFA from the Yale School of Drama, and she has already garnered wide recognition for her talents.  Her attention to human contradictions and cross-cultural details reveals a keen understanding of the universal in human nature, and you can’t argue with that.  She is a playwright to watch.

I have no idea why it took me so many years to get up to the Contemporary American Theater Festival.  The four plays I didn’t see this year look at least as intriguing as Barcelona, and I regret missing them.   This year’s Festival continues through July 29.  Check out the schedule or order tickets at www.catf.org.   Next year, I plan to be back for all five brand new plays.