On “The Normal Heart” (Another Look), Arena Stage, AIDS, and the Quilt

There are very few casual remarks to be heard from audience members emerging from a performance of Larry Kramer’s The Normal Heart.  Jaws are set.  Eyes are moist.  Nobody wants to talk about it yet.  It takes time to digest all the implications.  That was true when I saw it last year in New York  (You can check out my remarks on that performance in my August 2, 2011 posting on this blog.)   And it was true when Joan and I left the Arena Stage in Washington last Saturday, following the production there.

There is a great deal to be said for going to the theatre to see something you don’t want to go see – “Too much of a downer!” you say?  Or  “What’s it have to do with me?”   Or “I don’t feel like being lectured at.”  … easy ways of staying in the middle of the road, looking neither right nor left, praying nothing will go wrong.  But that can be a dangerous way to live.  Part of the function of fine drama is to bring us to the edge of that road so we know where it is:  it offers new knowledge and insights into the way we look at life and its boundaries … in short, it makes us better drivers.  The other part is to incite a virulent emotional response, to shake us out of our mundane “normal” existence, to challenge us with truths and obstacles we would otherwise go out of our way to deny and avoid (or run smack into).  It makes us more alert, and more focused… again, better drivers.

Playwrights have many fine tricks at their disposal to do all that.  They have ways to make us laugh, cry, ponder, be angry or grateful, be afraid or brave, be ashamed or proud.  And all this in the safety and comfort (relatively speaking) of a cushioned seat in a darkened theater.  The greater the range of human emotion they can bring out in us, the better their play, and the better we come to know ourselves,.

The Normal Heart is that kind of play; it uses all the available tricks.  The background is the beginning of the AIDS epidemic, 1981-1984.  It’s a tragic history, and a love story, but more universal even than that.  It is a study in denial, in how to stick your head in a hole in the ground and ignore the obvious.  It’s also a study in how to deal with futility, and how to find the strength to keep on fighting… for justice, for acknowledgement, for life itself.  In the end, as with so much tragedy, it is life-affirming!

Lets just get some of the nitty-gritty out of the way up front.  Once again the acting is over-the-top superb and powerful.  These people have something to say, they mean it, and when the stakes are this high, there’s no backing off.  The pacing is tight and fast — and exhausting.  This is the godchild of the Tony-winning New York production, with George C. Wolfe taking over Joel Gray’s directing duties, and Patrick Breen, who played Mickey Marcus in New York, sliding into the Kramer alter-ego role of Ned Weeks.

Arena Stage is presumably the first stop of a national tour of The Normal Heart, although I’ve seen no indication of future dates yet, and it closes here on July 29.  It’s a play that ought to be seen in every major city in the country, and then some.  One can only hope that the lack of a published touring schedule thus far is not an indication of more eyes being squeezed tightly shut to the most insidious epidemic of our times, and one that could possibly have been avoided.

When Larry Kramer began working on The Normal Heart in 1981, only forty-one people had died of this “rare cancer;”  it was being ignored by the public and the government alike.  Remember the Tylenol scare the following year, in 1982?  Some crackpot injected cyanide into bottles of Tylenol, which resulted in the death of seven people.  For this the government hired over a thousand investigators and spent millions of dollars seeking a culprit who was never found.  By contrast, by the time of the first production of The Normal Heart, in 1985, there had been over 6,000 AIDS deaths, and 20,000 cases had been reported world-wide.  But it would not be until that year, when it took not only Kramer’s screaming activism, but new frightening global statistics, and of course the deaths of 13-year old Ryan White and super star Rock Hudson, to shame the U.S. government into even setting up a fund for AIDS research.  And it would not be until 1987, near the end of his second term, that President Reagan felt able to use the word AIDS in public.  In 1993, our esteemed late neighbor to the south of Charlottesville, and his “moral majority,” were proclaiming “AIDS is not just God’s punishment for homosexuals, it is God’s punishment for the society that tolerates homosexuals.”

Today, AIDS is a world-wide plague in all but name:  75 million victims, 35 million deaths, a million of them in the United States.  Could it have been avoided?  Who knows?  Government expenditure to find a cure has been and remains miniscule.  There is still no vaccine, and no cure, only budget-busting, life-prolonging treatments.

What’s the significance of all of this, and what’s it all have to do with a play “review”?  I’m reminded of a successful stand-up comedian’s routine I heard recently on NPR.  He’s sitting in the first class section of his cross-country flight, when a wounded vet, an army captain in uniform struggles by en route to his middle seat in economy.  The comedian reasons to himself,  “I work safely on a night club stage every night, and I get paid royally.  That man went out to serve his country, endangered his life every day for his country, got shot up for it;  but he has to be squeezed into the middle seat in economy?  That’s not right.  I should get up and give him my seat.  I owe him that much, at least.  For all he’s done, he deserves to be comfortable, and I can sacrifice a few hours of my comfortable safe life to make him so.  (long pause.) … I did not do it.  I didn’t say a word.  I stayed quiet in my first class seat. … And furthermore … I didn’t feel guilty!  Instead, I was very proud of myself, thinking, I’m such a great guy because … at least I had that thought.”

I don’t think I’m untypical when I say I frequently need to be reminded that there is a huge gap between thought and action, and that the mere failure to act can result in huge consequences.  In recent years we’ve surely had to learn that over and over.  And ultimately, that’s what The Normal Heart is all about.  Sure Larry Kramer was angry. Twenty-six years later he is still angry.  He has a right to be.  Sadly, there is not an outdated line in his play.  He was right from the get-go about the potential for an AIDS disaster, and no one listened.  And he has lost many friends.

We have all lost friends, and will continue to do so.  Whether we choose to acknowledge it or not, whether we are straight or gay; whether we are sick or not, HIV/AIDS is in our communities.   It is still spreading, and ignoring it is making us all sick.  It is threatening our entire economic, physical, moral and spiritual future.  Yet still, when it comes to action, most of us prefer to remain spectators in our comfortable first-class seats.

Mr. Kramer, on the other hand, has acted.  He has screamed.  Yes, his play is a polemic.  True, no one enjoys being shouted at or preached at.  But The Normal Heart has nothing to do with laying a “guilt trip” on its audience.  On the contrary, it’s a clear reminder that guilt inhibits genuine action.  More importantly, it is both our history and our present.  It is a powerful reminder of who we all are as human beings, and how we could do better.   Paradoxically we do get that this is a play not about “them,” but about “us” …  all of us!  When you come out of the theater asking yourself “Who am I?  How do I feel?  Where was I?  What did I or didn’t I do?  How do I avoid?  How do I lie?  Where do I fit?  What do I do with it all now?”  … that’s a pretty good argument for the integrity of  and the necessity for fine theatre.   Again, The Normal Heart plays through July 29. 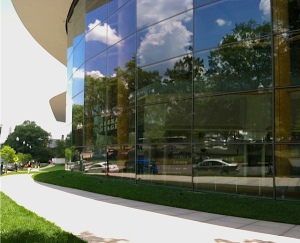 A careful look reveals the original Arena Stage inside the complex, complete with its original sign.  (Photo © 2012, William Rough) 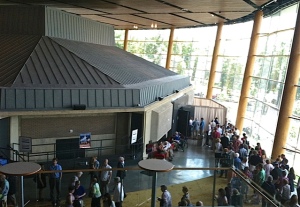 A view from the Catwalk Café  level.  The Mead Center for American Theater incorporates the Fichandler Theatre in the original Arena Stage building, roof and all, and two additional stages, the Kreeger, and the new intimate 200-seat Kogod Cradle.  (Photo © 2012, William Rough)

Washington’s Arena Stage at the Mead Center for American Theater and its antecedents have a long history of making fine plays that have moved me with those questions, as I indicated in my last posting.  I won’t gush any more about it here, except to say that it does account for the smattering of photos of the complex that I’ve included here.  It is the newest of the Washington landmarks,  a stunning architectural gem, and it is completely  dedicated to supporting great American plays and the young playwrights who are the future of our American Theatre.

Finally, what more is there to be said about “The Quilt.”  Everyone knows of it:   Starting with a single pane in 1987, it was pieced together by friends and families to commem-orate the lives of those who have died of HIV/AIDS.  Sections of it are on display in the Arena Stage lobby area, where it continues to bring tears to the eyes of those who take the time to read a pane or two:  It’s the waste, the utter waste, of lives of human beings who did nothing wrong but to love and be loved.   And for the next few weeks, other sections of the Quilt are back on the National Mall and elsewhere in the  Washington area, which for only the second time will host the 19th International AIDS Conference next month.  The quilt now measures 1.3 million square feet, weighs 54 tons, and is more than 50 miles long.

The AIDS Memorial Quilt, as displayed in its entirety on the National Mall in 1992. Check out portions when they’re again on display in the Mall and across the area for the Folklife Festival June 27-July 8. (Photo by Mark Thiessen /Courtesy of the NAMES Project)

2 Responses to On “The Normal Heart” (Another Look), Arena Stage, AIDS, and the Quilt