Side Tracking: Freedom Tower, and the U.S.S. Intrepid

A couple of side trips in the city on Friday added to the soul-cleansing I seek out with my city theatre binges.   The two hikes on the High Line certainly qualify in that area.  Add to them the trek down to see the 9/11 memorial.  Since I wasn’t alert enough to order up passes on line ahead of time, we never did get in to see the actual memorial, but we took a picture or two of the 1 World Trade Center in progress, the “Freedom Tower.”  And we had a great conversation with one of the volunteers at the visitor’s center, a man who was evidently in the area on the day of the tragedy, has seen enough in New York for one lifetime, and is at last ready to move down to South Carolina for some long overdue peace and serenity. 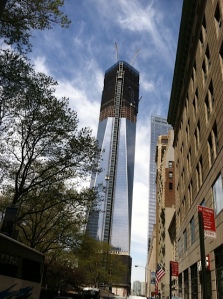 I’m not one for mixing in large crowds, and right now, New York is as jammed with more tourists than I’ve ever seen here.  On the street, English is pretty much a second language.  The Fifth Avenue sidewalks are more mobbed than the Avenue itself.  If you actually are actually trying to go somewhere instead of gawking, a combination of snow plow and dodge ball action is essential.   Crowds in the area around the 9/11 Memorial site were just as packed, but considerably more subdued, sensitive and yes, polite.  Seeing the Tower, and watching the respectful faces and the muffled conversations of everyone in the area is a sobering and somehow reassuring experience.  Mercifully, we personally knew no one lost in this tragedy, but a pilgrimage to the site will remain a part of future New York visits.

We also found ourselves drawn to the U.S.S. Intrepid, the Vietnam era aircraft carrier now permanently anchored in New York harbor, and operated by the City of New York as the Intrepid Sea Air & Space Museum.  Naturally, I also forgot to procure tickets in advance for this site, and we waited in line for over an hour.  I may not have a military bone in my body, but I am enormously grateful to the men and women who do.  This is an impressive tribute to everyone who served on her, and by extension to all the men and women of the American

What’s more, it’s a whopping good museum with some fascinating exhibits and an exciting display of aircraft of all types.  Later this month, they expect to receive the space shuttle Enterprise to add to their permanent display.

But there was a much more personal reason for this particular visit.  During the 1930’s, my mother had an early career as a pioneer aviatrix, marking airports, performing stunt flying and competing in air races, etc.  For a few brief days in the early years of WWII, she was slated to be an assistant commander in the WASPs, (Women’s Air Service Pilots), were it not for the insistent needs of her three-year-old son. 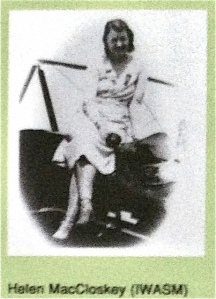 When she died in 1977, I had donated all of her air trophies to the International Women’s Air & Space Museum out in Cleveland, Ohio.  And when the IWASM put together a traveling exhibit to be called “Women Flyers in World War II,”  for loan to the Intrepid, one of those trophies was included in the exhibit.  And sure enough, there it was, tucked into a corner of Hangar 2, in a glass case along side a picture of Mom in her air racer that I hadn’t remembered ever seeing.

Bravo, Mom!  And thanks.

2 Responses to Side Tracking: Freedom Tower, and the U.S.S. Intrepid