On Gore Vidal’s “The Best Man” 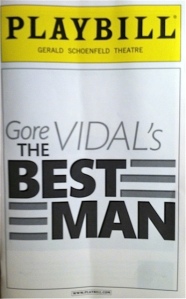 And now for the most star-studded production to hit Broadway in years.  Here’s what’s good about The Best Man:  It’s a script by a much-admired talented author:  Gore Vidal.  It’s a womping good story, about dirty politics during a primary convention election year, with a villain who actually looks a little like Rick Santorum, and a morally sound hero with Jimmy Carter qualities.  And it’s an opportunity to see a magnificent cast together on stage, demonstrating their considerable talents, possibly for the last time, folks like Angela Lansbury, James Earl Jones, John Larroquette, Candice Bergen, Michael McKean, Eric McCormack, Kerry Butler, Jefferson Mays, and more!  Okay, I’ll admit, personally I’ve never heard of the last few, but what they hell.  They all did a great job.

I loved the old movie version of this story, even though subtly censored as it sought to deny the mere existence of homosexuality.  Henry Fonda was the quintessence of the last moral politician.  But that was in 1964, for crying out loud, just after John Kennedy’s assassination, and in defiance of my parents’ Republican values,  not that long after I had learned to love Adlai Stevenson, which hadn’t done me or the country any good.  It’s an era we’ve left behind, as we all grew more jaded and convinced that corruption, blackmail, and conspiracy are everywhere.  In 1964, there was no mega-million PAC money floating around, no hidden microphones and tapes, no multi-media hordes of press broadcasting instant feedback around the world.  And Vidal’s dialogue did not seem quite so stilted, so obvious, so lacking in irony, so naïve.

Now it does.  Now it seems like this production is indulging in its own elaborate con job.  I ask myself, would I have bought these tickets and walked into the Schoenfeld Theatre without two of my longstanding favorite actors in it?  The answer, emphatically, is “No!”  And what did I get for my time and money?  James Earl Jones plays a very sick ex-president to the extent that his world-famous voice is muffled, mumbled, often even unintelligible.  And the wonderful Angela Lansbury, she of Mrs. Iselin (Manchurian Candidate), Mrs. Lovett (Sweeney Todd), Jessica Fletcher (Murder, She Wrote), and Mame fame, plays a tiny little role which rarely requires her presence on stage, and requires no special acting chops.  I might add that this didn’t prevent her from having the top-billed curtain call, emerging upstage center from her very own curtain to loud applause and screaming fans.   Larroquette is fine as our hero, but so laid back and immovable that I never really felt his inner struggle with a moral crisis or his muted celebration in solving it.

Mind you, everybody onstage did fine work, but to me it felt like they may have been betrayed by Hartford Stage director, Michael Wilson.  It looked like he might have told everybody to “put a lid on it.”  Some of his most basic blocking was awkward.  In fact, there was less blocking of any kind than needed, and far too many actors standing around with nothing to do as they routinely spoke their predictable and subtext-less lines.

To top it all off, the producers may have spent their wad on their high-paid stars, unless the actors were duped into doing this for the promise of working together for the sheer fun of it.  That would have been a perfectly valid reason, for the actors at least, if not for the audience.  But apart from the actors, and some very fancy rotating walls more designed for cleverness than for function, this was a cheap production that took a lot of embarrassing and distracting shortcuts.  I don’t think we would have seen fancy modern cameras and electronic flash in the 1960 primaries, nor would we have seen screw-top water bottles.   And if we were going to make an issue over the carpet pattern, it might have been nice if the carpet had one.

This might have been a terrific revival if someone had been paying attention to details.  But it came off as a very elaborate ruse to make a bundle of money off of ill-informed audiences.  I admit, I fell for it.  Still …  I got to see James Earl Jones and Angela Lansbury one more time!