On “The Book of Mormon,” and “The Normal Heart.”

Having aroused the interest of friends, theatre fans and film-goers, I was recently chastised legitimately for my failure to make a blog entry since the 13th of May.   To the detriment of blogging and the rest of my life, I’ve been completely preoccupied with directing my own production of Boeing Boeing for Charlottesville’s Heritage Theatre Festival.  One more performance to go (Aug. 4), but my job with the production is essentially over.  So is my work on the search committee for new Live Arts artistic leadership.  I’m actually starting to breathe again.

Since my last entry, I’ve made return trips to New York theatre scene, en route to and fro my 50th college reunion.  On those visits I managed to take in The Book of Mormon,  Bengal Tiger at the Bagdad Zoo, a selection of one-act plays at the Atlantic Theatre, The Normal Heart, and That Championship Season.  And since then, the Tonys have come and gone, confirming that for the first time in recent years I’ve had the privileged opportunity to see some of the best work New York theatre has offered up in many a season.   I also slipped into the NY Public Library at Lincoln Center to watch 2008’s Boeing Boeing, with Mark Ryland.  This time, he was playing a Wisconsin nerd, the quintessential opposite of his Rooster Byron role in Jerusalem, for which he won this year’s Tony, his second. (See my 5/12/11 blog entry)

Since then as well, I’ve also taken in the new Broadway-bound production of Sondheim’s Follies, at Washington’s Kennedy Center, and attended the first national convention of the Dramatists’ Guild.  I’ve also squeezed in a few fascinating films deserving of comment, including Midnight in Paris, Buck, Beginners, and Submarine.  I’ll save them for a future posting.  But where to begin?

For the record, I want to offer up at least some remarks on each of the plays, if only to commemorate in my own mind what has been one of the richest periods of theatre activity of a lifetime.  For War Horse, Book of Mormon, The Normal Heart, and Ryland’s performance in Jerusalem, the many Tony awards were inevitable and predictable.  I feel very fortunate to have seen them all.  A risk-taking ticket-buyer by nature, I made a mistake in choosing the Atlantic’s somewhat mediocre selection of 10-minute plays over Good People.  I should have known that Tony Award-winning Frances McDormand’s presence would have made it a must.  And I missed the call on Norbert Butz’ presumably superb performance in Catch Me If You Can.  Based on a pretty lightweight Tom Hanks/Leo DiCaprio movie, I never would have guessed it would ever earn the attention that it has, nor that anyone could top Andrew Rannells and Josh Gad in Book of Mormon, who I suspect cancelled each other out by splitting the Tony vote for best actor in a musical.

For anyone heading to the big city, Freud’s Last Session is still playing off-Broadway, and War Horse, Jerusalem and Book of Mormon are still playing on Broadway.  They should be at the top of must-see lists if tickets are available.  (See earlier postings for comments on the first three.)

It should come as no surprise that South Park Creators Trey Parker and Matt Stone have written one of the raunchiest shows ever to hit Broadway.   Book of Mormon is absolutely filthy, and an absolutely delightful, roll-in-the-aisles romp.  It’s essentially the story of two young Mormon missionaries who set out to tame the wild tribes of modern Africa.  Whether or not you’re a fan of such robust comedy, it will win you over in the first five minutes.  It is also a huge slap in the face at Mormonism and every other “religion” known to man which claims exclusive ownership of the real “truth,” be it spiritual, racial or political.  Why the Mormons are not up in arms to shut it down is beyond me.  Perhaps they haven’t yet taken in just how wonderfully insulting it is, or what a direct slam it takes on the basic tenets of Mormon “faith.”  Or perhaps they don’t care, just so long as all the natives convert in the end.   Or maybe… maybe they actually do have a sense of humor, one that the rest of us could use in distancing our own trials of daily living and pretending that Washington doesn’t exist.  Don’t be frightened away by the smut in this show.  If you can get tickets, leave the kids and go!  If you take strong offense, you can always leave at intermission … but I’m betting you won’t.

The other play that left me floored, albeit in a completely different way, was Larry Kramer’s The Normal Heart.  Originally written in 1985, it documents the beginning of the AIDS crisis, before the public at large knew just how serious an epidemic it would become.  The multi-Tony winning revival now plays against a background where open discussion of the disease is still stifled, where it’s estimated that over a million people are living with AIDS in America alone, where over a half-million victims have died and 16,000 may die this year of AIDS in the good old USA.  World-wide, there are currently 33.3 million people infected, and in the next few years it will become the third largest cause of death.  And there is still no cure, only very expensive life-extending treatments. 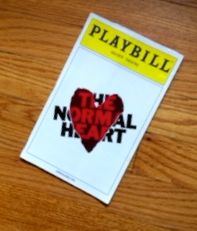 The play doesn’t tell you all that, of course, but the figures do give it special relevance.  It is a testament to our human ability to see only what we want to see, and to political obstinacy, which we all know something about in our own times.   But this is no mere preachy documentary.   It is a powerful piece of life-and-death drama.  It exposes the urgency of dealing with crisis, the deliberate methodology of distortion, and the superficial conflicts and delusions that divide us to make matters worse.   Have we all not just borne witness to it all in Washington over the past few months?

This particular revival of The Normal Heart featured a universally outstanding cast, led by Joe Mantello as Ned Weeks, an early AIDS activist, and the brilliant John Benjamin Hickey (Tony winner, and featured actor on The Big C) as his lover, a NY Times reporter who first brought the horror of the potential epidemic to light.  It also featured an astoundingly self-effacing Ellen Barkin as the paraplegic Dr. Brookner, delivering a heart-stopping polemical monologue on officialdom’s refusal to cope with the crisis.

Yes, it is an angry play, responsibly so, emotionally charged, and often not easy to watch.  But it is also cathartic, and laced with the kind of humor that lets us cope with life’s most challenging moments.   No mere sermon, it is a superb piece of theatre, perhaps even better able to be seen and heard now than it was in 1985, when denial was so much easier.  The 2011 Broadway revival has now closed.  But hopefully it is about to undergo production revivals all over the country.   Go find it, see it, produce it!.

1 Response to On “The Book of Mormon,” and “The Normal Heart.”