5/11/11:   Already back two days from one of my best New York theatre trips ever for sheer stage power.  And I haven’t yet even touched on what was certainly one of the most powerful single performances I’ve ever seen:  Mark Rylance’s rendition of Johnny “Rooster” Byron, in Jerusalem: England’s Green and Pleasant Land, a new “comedy” by Jez Butterworth. My wife and I went for a Sunday matinee performance, where the audience was filled with familiar faces of the theatre’s past …  Doris Roberts, Bill Macy, Ben Gazarra, and George Segal, among them.  (God, we’re all getting old!)   We had little expectations for the play, other than great word-of-mouth.    We felt we’d already broken records for top quality, having just seen Freud’s Last Session and War Horse.  A colleague who had seen the original Royal Court Theatre production in London, had suggested I include it in my “Script Analysis” curriculum at UVA this past semester, but I didn’t have the slot for it.   Nevertheless, I had for some time been reading of the play’s power, and of Mark Rylance’s over-the-top, mind-boggling performance.  The play was a huge hit in London, and is now in New York, despite its breaking all the rules for hit status:  Its title is a puzzle;  it’s about something no one can describe in a nutshell; it’s three hours long, with two intermissions; and it has a large cast of seedy, profane characters most people would choose to either ignore or avoid.  And still it strikes a chord, and audiences are flocking to it. 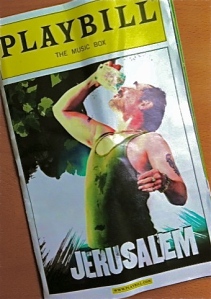 Let’s get the title straight first, thanks to the Director’s Notes in the program:  It has nothing literally to do with the city of Jerusalem.   Jerusalem is a popular English hymn, sometimes thought of as England’s second national anthem.  Some may remember it from Chariots of Fire.   It is based on a poem by William Blake, who was inspired by the legend that Jesus traveled to the British Isles during his “missing” years.  Jerusalem is  a metaphor for the establishment of heaven on earth. It was set to music by Hubert Parry in 1916, and became an inspiration to British soldiers fighting in the WWI trenches.  “I will not cease from mental fight, nor shall my sword sleep in my hand, Til we have built Jerusalem in England’s green and pleasant land. ”

Trained as an actor, Mark Rylance has spent much of his career directing.  He was for ten years the original Artistic Director of  London’s Globe Theatre, where I remember being absolutely captivated by a Merchant of Venice, and watched Vanessa Redgrave take on Prospero.   He’s won all sorts of acting awards in England, and on his first trip to Broadway two years ago he won a Tony for his performance in Boeing, Boeing, which I’ll be directing for Heritage this summer.  The Tony people no doubt had to fight hard not to nominate him twice this season, thus making him compete against himself for best actor in both La Bête and Jerusalem, in what would have been a new first.  Both performances were reputedly superb, but the committee limited itself to the nomination for the Rooster Byron role.   If the Gods are just, he will again be the winner on June 12.   Including his, there are six Tony nominations out there for Jerusalem.  All are well-deserved, I’m sure, although if called upon to make a personal choice, I think War Horse is a shoe-in for best play, director, scenic, lighting, and sound design.

The stunning Rylance performance may tend to overshadow the rest of Jerusalem, but it should not be forgotten that Jez Butterworth wrote the role in the first place, and deserves the bulk of the credit.  Johnny “Rooster” Byron is the most compelling anti-hero I’ve seen on stage in a long time.  There are suggestions in him of both Christ and anti-Christ.  He’s a kind of  free-spirited squatter, an ex-motorcycle daredevil, and dispenser of tall tales and drugs.   He is permanently camped out in his seedy Airstream trailer, parked in a woodland glade neat Flintock, England.  From there he accommodates those neighbors in need, including a pack of idolizing lost teens, an old man, and a Morris-dancing barkeep — all white, curiously enough, if they are meant to represent the contemporary British social scene.

Rylance makes a powerful entrance at the play’s opening, submerging his head while doing a handstand over a water trough. We know from the beginning that there is something unearthly about Rooster Byron, something close to supernatural in his Romany blood.  By the end of the play he is a branded, crippled, humiliated, defeated man, facing arrest and immediate eviction from his squatter’s camp to make way for new estate housing.   It is his Armageddon, or is it the town’s?  Or is it metaphorically the end of western civilization?  In his final breaths he calls down upon everyone and everything around him the vengeful wrath of the Druids and all the dark forces of the universe.  And it sure looks like his call will be answered.  But just who is the enemy here?  Is it the corruption and hypocrisy of life in town, which drives its kids to Rooster’s camp seeking release from a life without hope?  Or is it Rooster himself, corrupter of our youth?  Is it the inevitable expansion of the deadening engine of “civilization” itself that squashes the vital human spirit?   Or is it the already deadened human spirit that has ceased to defy its fate?   The questions, and the play, are huge.  And they are as pertinent to Americans as to the British.

Whatever else it is, the play is a condemnation of the mess we have made of our modern world, and a call for the morally simpler era of our past.  Sounds heavy, disturbing?  It is; but it is also immensely funny, especially in the first act, before it turns very dark.   It’s all enormous fun to watch, if ultimately more than a little depressing and enraging … which for me makes it fascinating.  I think I need to go back and read the script now, and then see it again.  I may not understand it any better, but to watch Rylance’s risky choices as an actor, and his incredible range as he inhabits Rooster’s extremes, is the rarest of treats.